Thanks to a continuous focus on research, development and testing, Jøtul is now a world-leader within Clean burn Technology. But why is it so important to be ‘best in class’ regarding clean burn wood stoves, fireplaces and fireplace inserts? Well, first and foremost, it is a question of improving the climate, by reducing airborne dust to a minimum. This is followed by saving consumers money, because Clean burn Technology gives you more heat per log.

The Norwegian authorities require today’s stoves to emit no more than 10 grams of particulate matter for every kilogram of wood that is burnt - and therefore have one of the world's strictest regulations linked to particulate emissions.

However, here at Jøtul, we have much higher climate ambitions than this, and we have therefore developed technology which results in emissions of less than half of the statutory requirement. Some models can even boast emissions as low as 1.9 grams, a level which no other manufacturer can match. 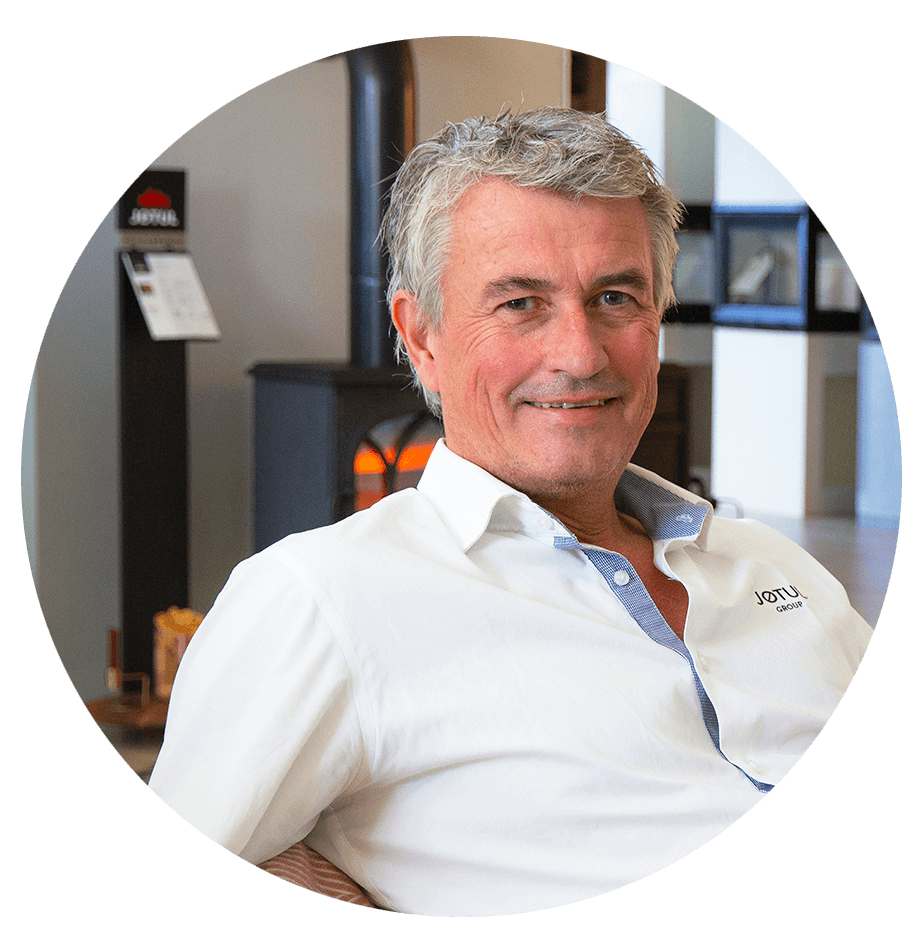 The secret to success lies in the combustion process.

When wood is heated, gases and particulates are released. Old stoves release these gas and particulates straight up the pipe together with the heat, resulting in an efficiency of just 40 %. The principle of clean burn stoves is that they are better insulated, which increases the temperature in the burn chamber.

In addition, extra heated air (oxygen) is fed in just above the fire, which ensures that what would have been unburned gases and particulates in an old stove undergo combustion again. This results in lower emissions through the pipe, doubles the efficiency and releases more heat into the room. It is these processes that we are constantly striving to improve in our research and development, in order to get closer to the optimal burn process.

A brand for the environmentally aware

Christensen also highlights the fact that most people investing in a new wood-based stove or fireplace or replacing their old one are environmentally aware. This makes Jøtul the natural choice!

Jøtul takes responsibility for the climate

Ever since the statutory requirement for clean burn stoves and fireplaces was introduced in Norway, we have worked actively both in relation to authority initiatives and with organizations both nationally and worldwide to spread the message of the importance of clean burn. Although Germany has now introduced a ban on the use of all wood-fired stoves manufactured before 1995, the fact that emission requirements are not being imposed on new stoves currently available on the market represents a major challenge which means that many manufacturers do not have the same focus on the climate.

There are also no measurements corresponding to those in Norway which show the enormous benefits that clean burn stoves and fireplaces offer in relation to their conventional equivalents.

While wood-firing is undoubtedly a major contributory factor behind the challenges relating to airborne dust, there is broad agreement amongst both experts and environmental organizations in Norway that the solution lies in replacing old stoves with new, clean burn wood stoves and fireplace stoves. It is not wood-firing in itself which lies behind the pollution; it is the use of old stoves and fireplaces which result in incomplete combustion. Replacing old fireplaces with new ones will resolve the pollution problems caused by wood-firing.

From 1 January 2022, new requirements regarding emissions from stoves will take effect as a result of EU/EEA legislation concerning the environmental design of stoves. According to Standards Norway, the requirements will cover emissions of particulate matter (PM), organic gaseous compounds (OGC) and carbon monoxide (CO). For the sake of the climate, we hope that strict requirements will be established which challenge us to maintain our focus on developing clean burn technology further.

It is vital to use fuel types in stoves and fireplaces which produce minimal emissions of particulates for a healthier climate - and that of course will be the principal motivation for most people to replace their old stove or fireplace. However, environmental awareness also makes good financial sense.  Fuel costs will be considerably reduced because less heat disappears up the pipe and more is released into the room.

According to “Energismart” , a project run by Friends of the Earth Norway which aims to make it easier to make energy-smart decisions around the home, you will make the following savings with a clean burn stove:

However, the benefits do not stop there; the Chimney Sweep Service reports that minimal amounts of soot now have to be swept out of chimneys compared with previously. In other words, cleaner combustion, with emissions cut by 90 % compared with old stoves, has considerably reduced the risk of chimney fires.

This is based on Norwegian experiences, but will of course also apply in any other country which uses wood as a fuel. If air-polluting substances which are released in one country can be transported via the atmosphere and contribute to poor air quality in neighboring countries, facing up to the challenges relating to airborne pollutants should be in everyone’s interest.

In other words, with our Clean burn Technology, you are contributing to both a cleaner environment and saving on your fuel bills, enabling you to enjoy the cozy warmth to the full.

Wood-firing - a climate-friendly alternative!
Recirculated heat from Jøtul
Better air quality with clean burn
How can we overcome the problem of airborne dust?